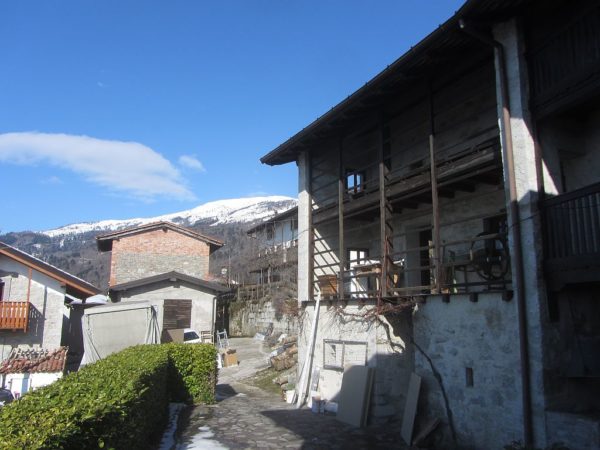 The Matajur Museum, in the Gorcova house in Masseris, highlights the aspects of everyday life in the villages on the slopes of Mount Matajur.

The museum’s rooms have been made available by their current owner Silvano Cudrig, who was born and lives in Belgium; his father was from Masseris and his mother from Idrija (Slovenia).

The building, which used to belong to the Cendou-Gorcovi family (Gor tih), is a valuable and well-preserved example of typical rural – popular architecture.

The big and well-finished building (with a lot of balconies, columns…) belongs to the “wealthier” part of the residential architectural heritage. In this area, however, such buildings can never be attributed to nobility, but to families who had assumed, for different reasons, a respectable social position within the community, without however ceasing to be an important part of it.

The building was renovated after the earthquake that hit the Friuli region in 1976 under regional law 30/1977, which provided for the recovery and valorisation of historical, artistic, and environmental heritage.

The last family to live in the Gorcova house was Giorgio Cendou’s family. He died in 1995, aged 43. After coming back from Brazil with his wife, children, and grandchild after the ‘80s, he initially lived in Cividale with his parents, and then spent the last years of his life in Masseris.

The collection has been realised with the cooperation of the Municipality of Savogna and Luisa Battistig Bazielnova.

Entering the “barn”, now transformed into the “Matajur Museum”, from the left and in sequential order, the following exhibitions can be seen: 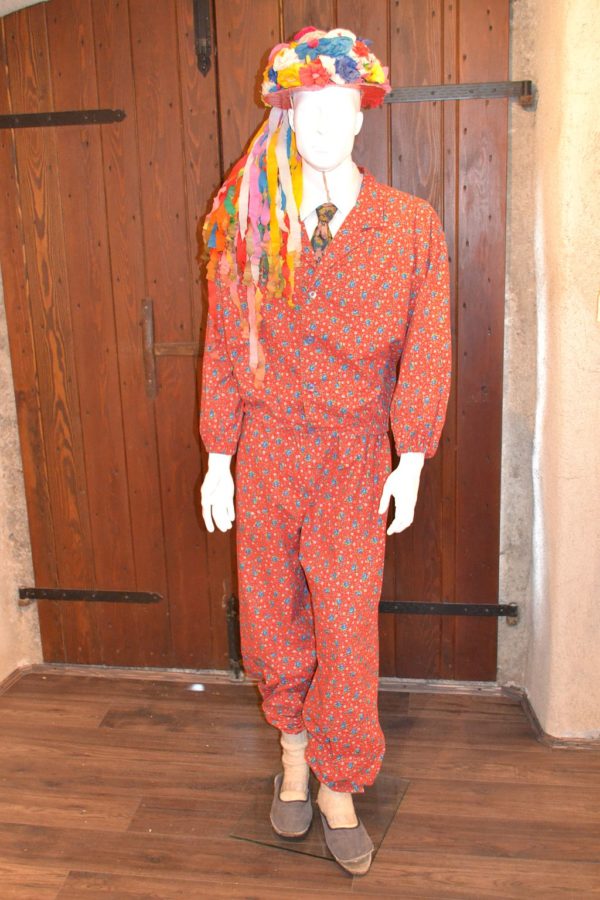 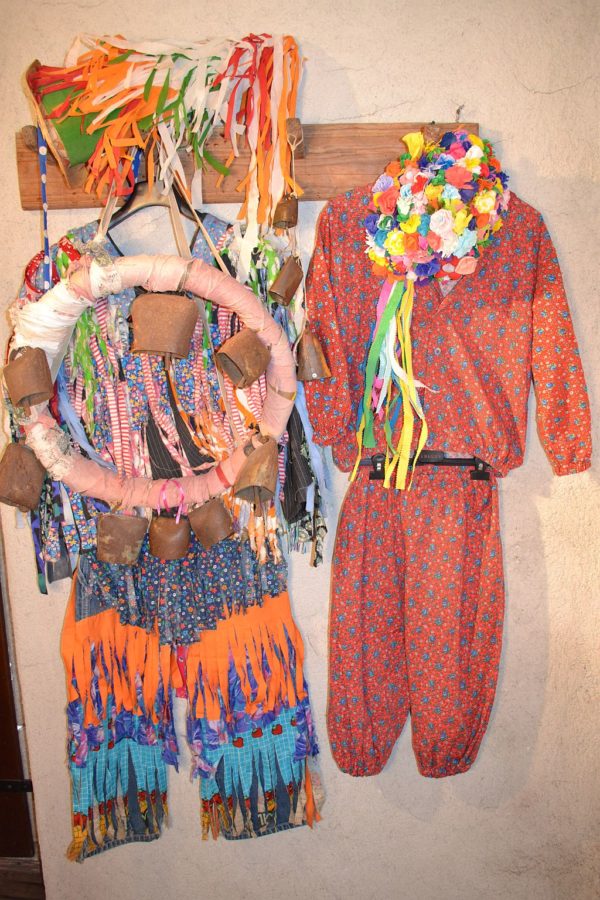 Carnival figures from Montemaggiore: “Te liepi-te gardi” – “the beautiful and the ugly”.

The mannequin wears the typical costume for “the beautiful”; next to it, there are the costume, cowbells, and hat of the Pust, also known as “the ugly”.

The panel on the wall shows photos of the carnival in the past and nowadays, and describes the composition and characteristics of the group.

The beautiful, “te liepi”, are generally formed by six figures: three are dressed up as women, and three as men. In the past the costume was obtained from everyday items of clothing, which were maybe a bit more colourful, strange, or out of trend, while recently the group wears costumes with floral patterns created for the occasion.

The colourful hats have remained intact, embellished with multicoloured paper flowers and colourful ribbons that fall on the women’s back and on one side of the men’s face and shoulder. The ugly, “te gardi”, who were the first to arrive, announced by the cowbells, blacken their face with soot and have a tall pointed hat, decorated with colourful strips in the same fashion as the costume they wear; the costume is then completed with the handkerchiefs worn on the head and around the neck, the cowbells hung to the belt, and a long stick.

The group cannot do without a berač or klobasar that collects the gifts, mostly eggs and sausages, and other carnival figures, e.g. the woman carrying her husband in her pack basket, baba, ki nese moža v košu.

The sound of the accordion cannot be missing, as it accompanies the dances in every house visited by the group.

In the past, the carnival used to last several days. On Thursday the group started from a distant place and got closer and closer to the village. On Thursday they usually went to Mersino, on Saturday to Rodda or Cepletischis, Tercimonte, and Masseris, on Monday to Stermizza, and on Tuesday to Montemaggiore. On Sunday there was the dance, but the company gathered in barns also on other evenings. And finally, the next Saturday there was the carnival celebration to consume all the leftovers.

The Carnival – Pust is one of the calendar feasts of the farming world and derives from old fertility and prosperity rituals. 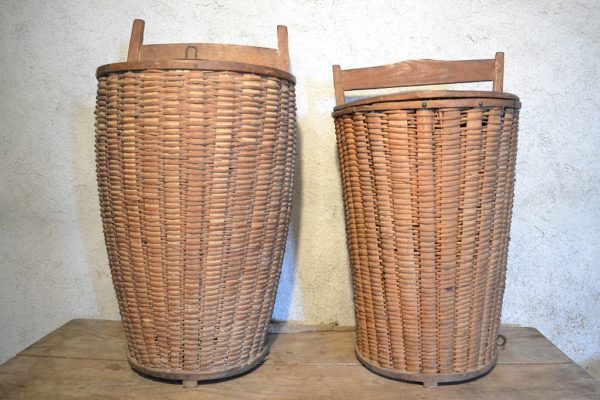 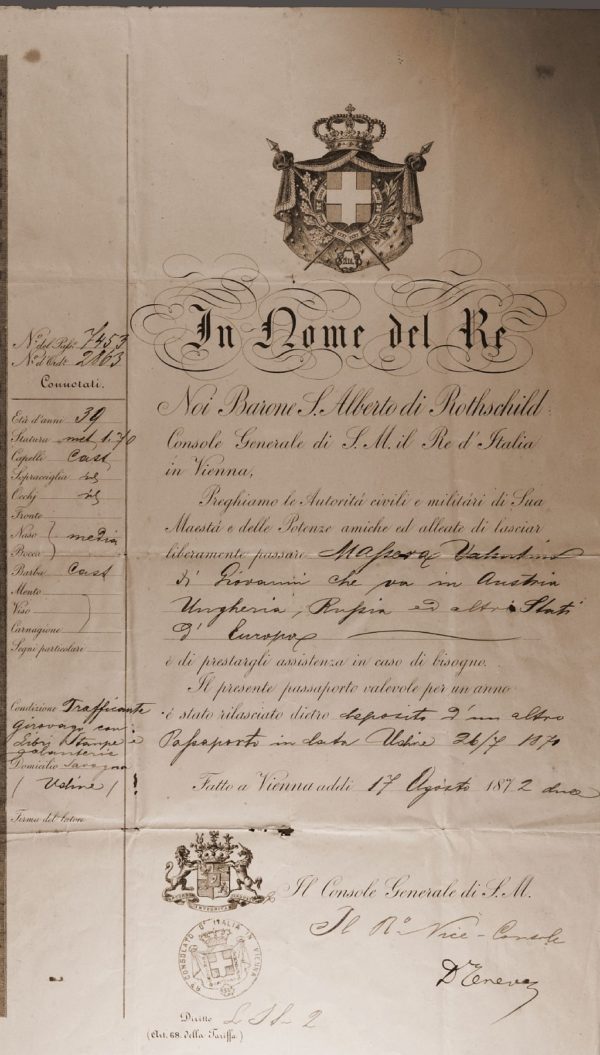 On the floor there are two small pack baskets which were used by the “guziravci”, and above them there is a panel on “Temporary Emigration in the Natisone Valleys”.

Next to the panel there is a copy of a one-year passport issued on 17 August 1872 to Valentino Massera by the General Consul of H. M. the King of Italy in Vienna for the “condition: trader, peddler with books, prints, and trinkets”.

The temporary migration associated with peddling jobs was, from the half of the 18th century until the First World War, and partly also afterwards, a characteristic and traditional trait of Benečija.

The terms were adapted from the German “hausieren” and “Hausierer”. The reason for this was that “peddling traders” worked in the Austro-Hungarian regions, sometimes going as far as the Balkan areas and Eastern Europe. From Autumn to Spring, when there was less work in the fields, they sold books, prints, and decorative paper produced by the Remondini company in Bassano, as well as various trinkets. The trade reached such big dimensions that in 1770 an agency opened in San Pietro al Natisone to provide supplies for the peddlers. 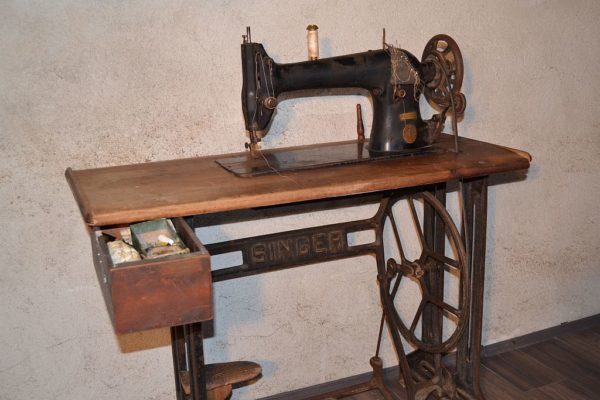 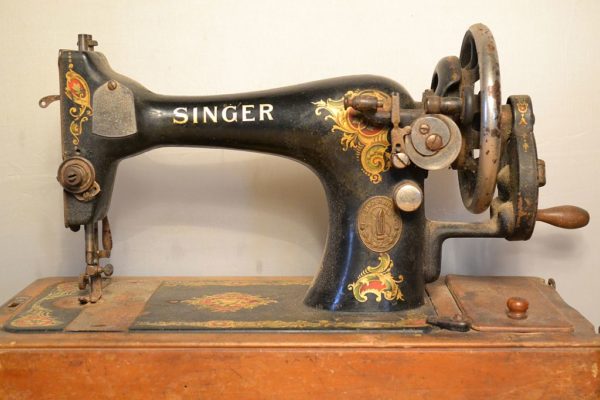 Two sewing machines without pedal are placed on a table, next to them there are two irons, a hemp sheet, and a white tablecloth with some initials embroidered on it; next to the table there is a sewing machine with pedal, which belonged to the last tailor in the village. The tailors sewed clothes, underclothing, shoe uppers, and much more until the ‘70s. 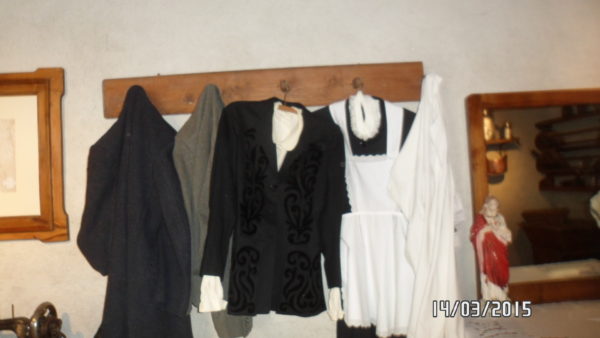 Some of the clothes on the old hanger are a reminder of the job that many girls did for rich or noble families in different Italian cities, and also abroad (Belgium, France, England); with their earnings they prepared their dowry.

WEAVING WITH A SPINNING WHEEL

Every house owned a spinning wheel to weave the sheep wool that would then be used for knitting with the needle and produce socks and sweaters for the family. Socks, sweaters and black shawls are preserved in a chest of drawers with a mirror. 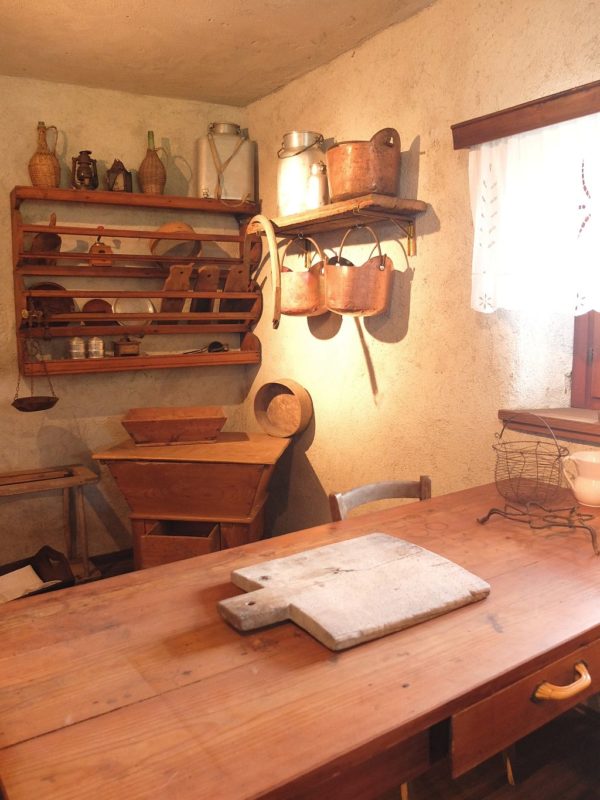 After telling the story of old crafts, the next thing that can be seen in the museum tour is an old alpine trooper hat placed on the chest of drawers with a mirror, which represents a tribute to all the men that fought in the Second World War. Two gypsum statues are also present, one representing the face of the Virgin Mary, the other the Sacred Heart of Jesus. 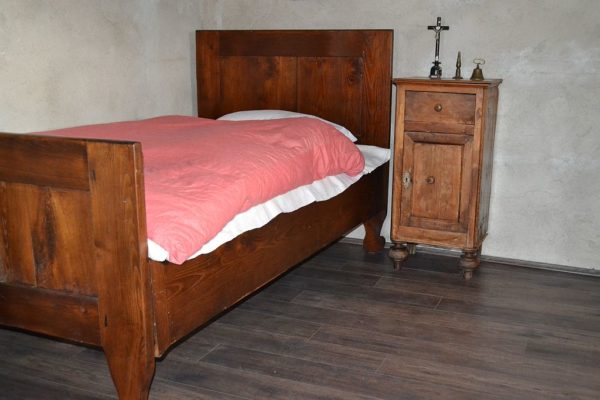 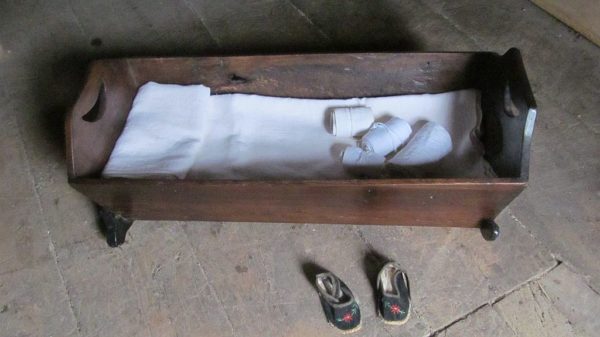 In the corner there is a queen-size bed with a chicken duvet, hemp sheet, and embroidered pillowcase. Next to the bed, there are a nightstand, a chamber pot, an iron tripod used for washing, and a small cradle containing swaddling clothes for babies and a pair of small shoes. Also related to children, an object can be spotted next to the cradle, unknown to most and untranslatable in Italian; the Slovene term, “hojca”, suggests that it was used to let children walk while still grounded to a spot. 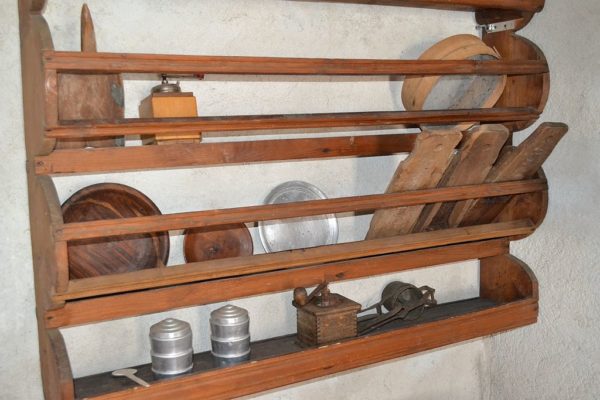 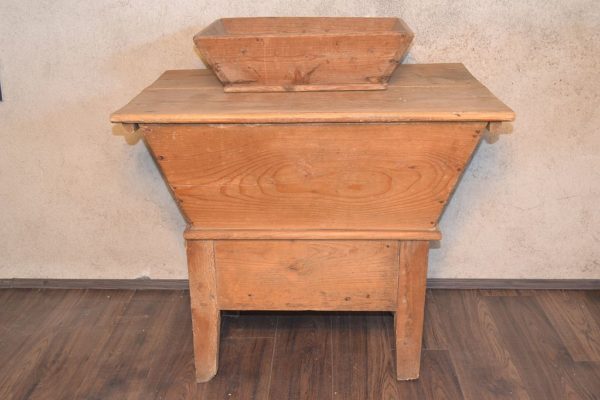 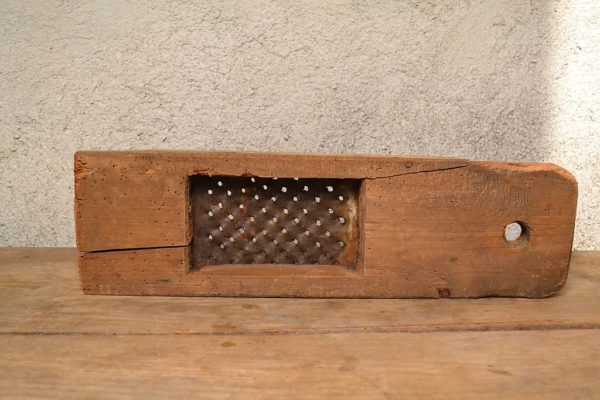 Under the plate rack there is the madia, a cupboard, on which there are some wooden containers called “units of measurment” to measure the amount of flour to be donated to the priest or the amount of seed for sowing; three turnip graters are also placed there.

Between the plate rack and the window, a wooden board hangs very high on the wall to indicate where in the past copper buckets were hung in order to have spring water in the house. On this shelf there is a copper bucket and another small aluminium container for the transportation of milk. Here hangs the povierak – an arched stick, used to carry buckets or baskets on the shoulders. 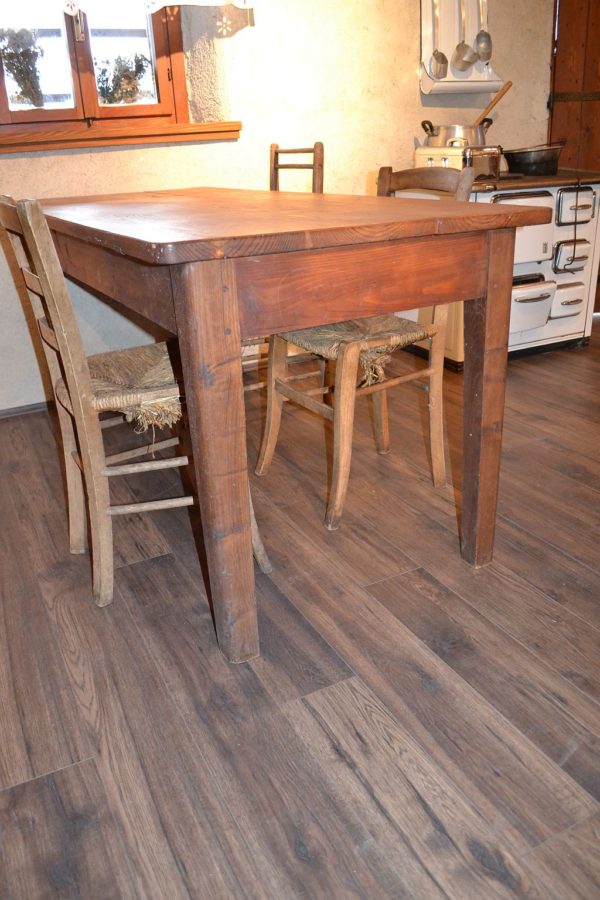 Under the window there is a table. A wooden cutting board for polenta is placed on it, along with an iron trivet and a ratchet (Slovene: rapotaunjak, laskotac, darlica), an instrument that was used by the children to make noise during the three days preceding Easter, when the church bells stop tolling and Jesus’ death is celebrated.

On the window sill there are an iron basket, a pitcher, a salt shaker, and a carbide lamp; the window is decorated with a white embroidered curtain.

Between the window and the door leading to the balcony, there is a kitchen with a white stove that is characteristic for the years following the war. Above it, there is an aluminium pot for polenta with a wooden stick for stirring, and next to it there are more aluminium pots. On the wall there are a wooden spoon rack in white enamel containing various wooden spoons, and next to it there is a bunch of flowers for the Rožinca. 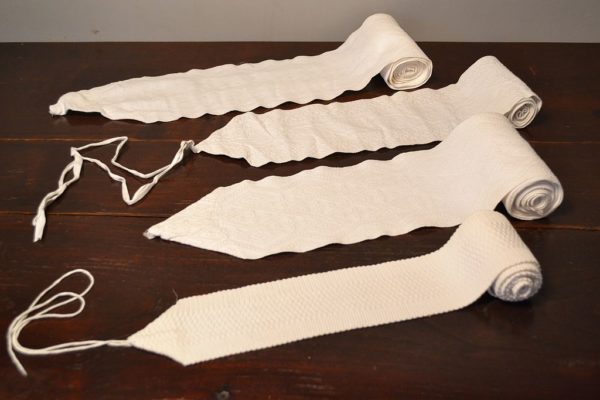 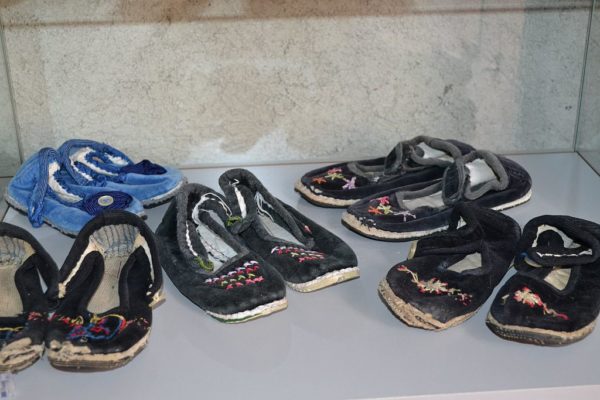 In the right corner, entering the museum, there is a glass cupboard with locked doors in which some white baby clothes, embroidered nightgowns, and pillowcases are stored; handmade cloth shoes, a pair of wood and leather shoes, belts, a wallet, and some religious books in the Slovene language from the end of the 19th century are also on display. The first radio owned by many people right after electricity was brought to the houses is also placed on this cupboard.

Next to the glass cupboard there is a white shelf with some books, educational flyers, and postcards of our territory. 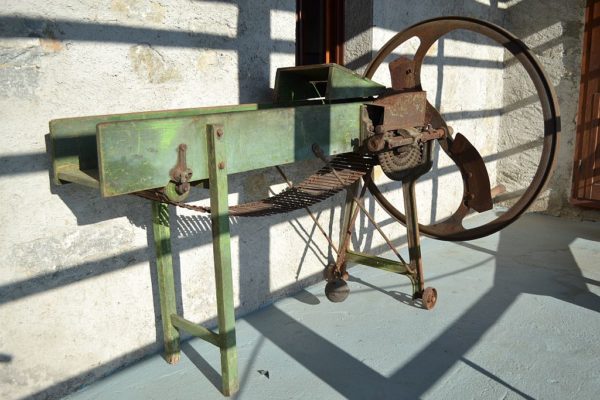 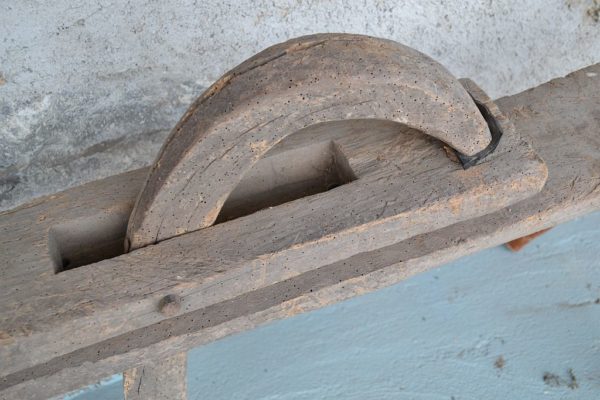 Many objects are displayed on the balcony: near the wall there are two wooden benches that were placed by the stove so that the people could warm up; there is the machine for shredding the corn stalks which were used to make beddings for the animals; behind the machine there is a pack basket; on the wall hangs a big sieve; other items are two “zbrinče”, wicker containers that were placed on the head and used to carry hay or dry leaves, and a saw to make boards from logs. You can also see a “baba”, a wooden tool on which one could sit in order to block with the feet the object that needed to be sanded, like in a press; it was used to make some pieces for the rakes as well as for other woodwork.

On the wall hangs a big sieve that was used in the past to sift wheat or corn. 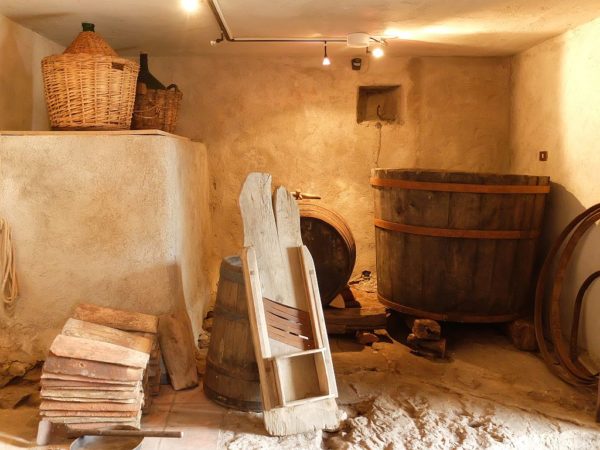 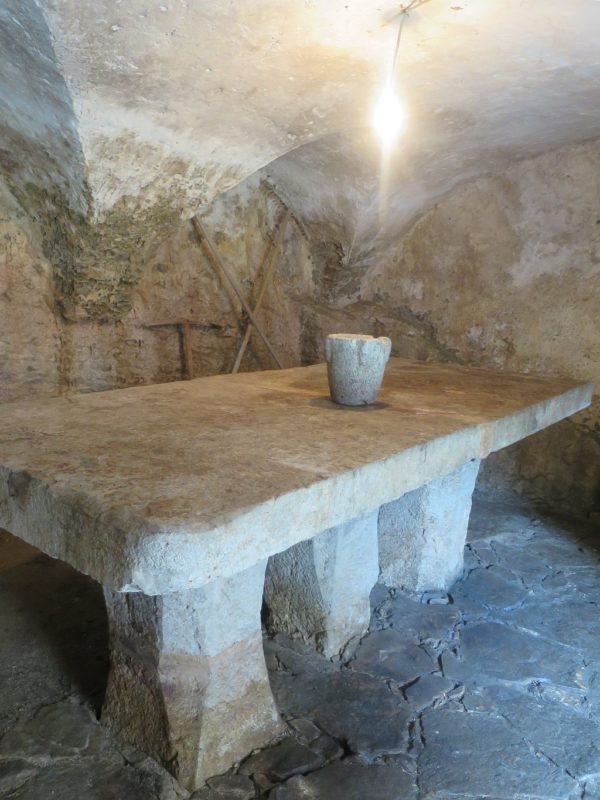 The basement has a characteristic natural floor, made entirely of stone, which keeps it very cool in the summer. In the corner left to the entrance, under a small window in a high position, there are the copper pots that were used to cook the meal for the pig with fruit scraps or vegetables that were cultivated excusively to feed it.

On the shelf there are some aluminium buckets that were used for milking, another povierak, some wooden containers, several graters, and a manual machine for grinding pork when preparing and processing cured meat.

On the floor you can see different chains that were used in the cowsheds to tie cows and calves to the troughs; and various tools for working in the fields, which are clearly separated from those used by the carpenter and the shoemaker. The tool for sharpening the sickle is inserted in a natural hole in the floor. Next to these tools there is a pile of tiles that were made in the village; to give them their shape, the thigh of a big man was used as a mould. Near the tiles there are two wooden tubs for the preservation of turnips and cabbages (brovada and sauerkraut). In the corner there are a vat and a barrel suggesting that in the past every family used to grow grapevines in the fields below the village towards Iellina, and to produce the wine that was consumed by the family. On the wall there are some crampons and a pair of ski poles.

The right corner of the basement was made into a basin by building a small wall, thus creating a space that was (according to some sources) filled with water or more likely used to keep the food fresh. 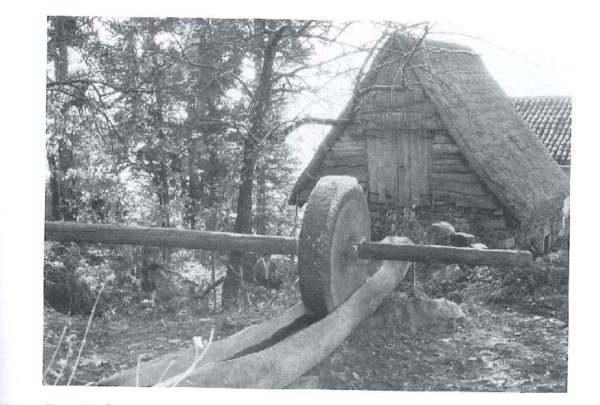 The people walking in the street below the Gorcova house can see an old grindstone placed on a wall that was used to squash apples and pears.